Last month our long time serving official and ex Karting Australia president Trevor Crane was featured in the the Riverine Herald Echuca newspaper after receiving his Life Membership award from Karting Victoria at the end of year presentation night in December. 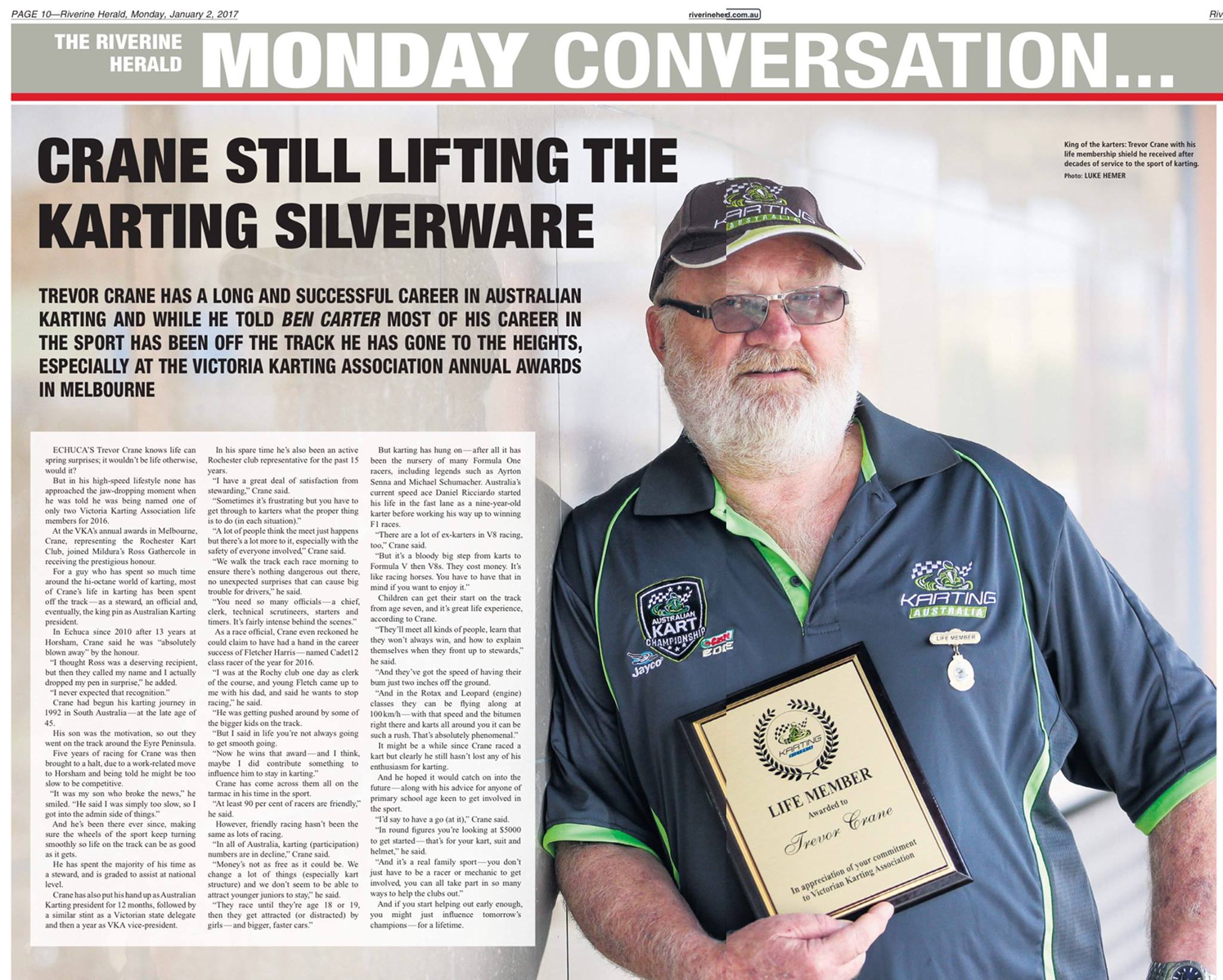 Echuca’s Trevor Crane knows life can spring surprises; it wouldn’t be life otherwise, would it?

But in his high-speed lifestyle none has approached the jaw-dropping moment when he was told he was being named one of only two Victorian karting Association life members for 2016.

For a guy who has spent so much time around the hi-octane world of karting, most of Crane’s life in karting has been spent off the track – as a steward, an official and, eventually, the king pin as Australian Karting president.

In Echuca since 2010 after 13 years in Horsham, Crane said he was “absolutely blown away” by the honour.
“I thought Ross was a deserving recipient, but then they called my name and I actually dropped my pen in surprise,” he added.

“I never expected that recognition.”

Crane had begun his karting journey in 1992 in South Australia – at the late age of 45.
His son was the motivation, so out they went on the track around the Eyre Peninsula.
Five years of racing for Crane was then brought to a halt, due to a work-related move to Horsham and being told he might too slow to be competitive.

“It was my son who broke the news,” he smiled. “He said I was simply too sow, so I got into the admin side of things.”

And he’s been there ever since, making sure the wheels of the sport keep turning smoothly so life on the track can be as good as it gets.

He has spent the majority of his time as a steward, and is graded to assist at national level.

Crane has also put his hand up as Australian Karting president for 12months, followed by a similar stint as a Victorian state delegate and then a year as VKA vice-president.

In his spare time he’s also been an active Rochester club representative for the past 15 years.

“I have a great deal of satisfaction from stewarding,” Crane said.
“Sometimes it’s frustrating but you have to get through to karters what the proper thing is to do (in each situation).”
“A lot of people think the meet just happens but there’s a lot more to it, especially with the safety of everyone involved,” Crane said.
“We walk the track each race morning to ensure there’s nothing dangerous out there, no unexpected surprises that can cause big trouble for drivers,” he said.
“You need so many officials — a chief, clerk, technical scrutineers, starters and timers. It’s fairly intensive behind the scenes.”

As a race official, Crane even reckoned he could claim to have had a hand in the career success of Fletcher Harris – named Cadet 12 class racer of the year for 2016.

“I was at the Rochy club one day as a clerk of course, and young Fletch came up to me with his dad, and said he wants to stop racing,” he said.

“He was getting pushed around by some of the bigger kids on the track.
“But I said in life you’re not always going to get smooth going.
“Now he wins that award — and I think, maybe I did contribute something to influence him to stay in karting.”

Crane has come across them all on the tarmac in his time in the sport.
“At least 90 per cent of racers are friendly,” he said.
However, friendly racing hasn’t been the same as lots of racing.

“In all of Australia, karting (participation) numbers are in decline,” crane said.
“Moneys not as free as it could be. We changed of lot of things (especially kart structure) and we don’t seem to be able to attract younger juniors to stay,” he said.
“They race until they’re age 18 or 19, then they get attracted (or distracted) by girls – and bigger, faster cards.”

But karting has hung on — after all it has been the nursery of many Formula one racers, including legends Ayrton Senna and Michael Schumacher. Australia’s current speed ace Daniel Ricciardo started his life in the fast lane as a nine-year old karter before working his way up to winning F1 races.

“There are a lot of ex-karters in V8 racing, too,” Crane said.

“But it’s a bloody big step from karts to Formula V then V8s. they cost money. It’s like racing horses. You have to have that in mind if you want to enjoy it.”

Children can get their start on the track from age seven, and it’s great life experience, according to Crane.

“They’ll meet all kinds of people, learn that they won’t always win, and how to explain themselves when they front up to the stewards,” he said.

“And they’ve got the speed of having their bum just two inches off the ground.
“And in the Rotax and Leopard (engine) classes they can be flying along at 100 km/h — with that speed and the bitumen right there and karts all around you it can be such a rush. That’s absolutely phenomenal.”
It might be a while since Crane raced a kart but clearly he still hasn’t lost any of his enthusiasm for karting.

And he hoped it would catch on into the future — along with his advice for anyone of primary school age keen to get involved in the sport.
“I’d say have a go (at it), “Crane said.
“In round figures you’re looking at $5000 to get started — that’s for your kart, suit and helmet,” he said.

“And it’s a real family sport — you don’t just have to be a racer or mechanic to get involved, you can all take part in so many ways to help the clubs out.”
And if you start helping out early enough you might just influence tomorrow’s champions — for a lifetime.