Saturday from the Victorian Kart Championship Round 2 at Oakleigh

The weather presented cool and cloudy conditions with intermitted sprinkles of rain for day 2 of Round 2 of the Victorian Kart Championship at the Oakleigh Go-Kart Racing Club.
Over 140 drivers, their pit crews and teams were at the circuit with the all important qualifying session kicking of the day, followed by heats 1 and 2 and all but 2 classes getting through to the completion of heat 3. 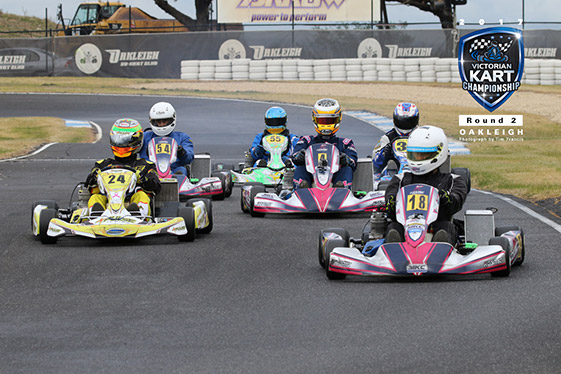 TaG 125 Masters
Steven Riddell took the pole with a time of 40.099, a tenth ahead of local Oakleigh member Vern Kranz and championship front runner Phil Smith.

It was a bad day for championship contender Smith suffering 2 DNFs, with Riddell taking out victory in heat 1 and 2 while Kranz took the win in heat 3. 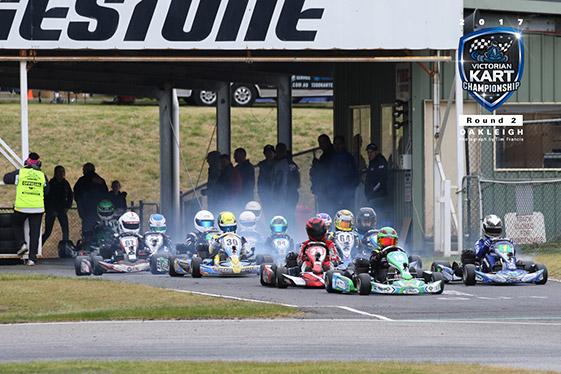 KA4 Junior Light
Jay Hanson fast the fastest of the 18 driver field in qualifying with a lap time of 41.519 just 2 hundredths of a second ahead of Cooper Webster with Jai Stephenson and Kacey Mann on the second row not far behind. 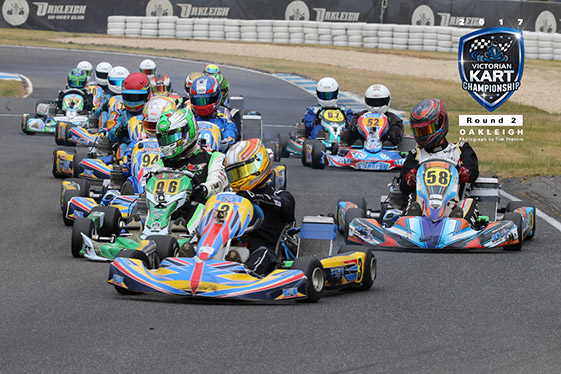 TaG 125 Light
Justin Francis put in a scintillating lap of 39.065 to secure pole position by 1 tenth of a second ahead of Nikolaj Thomas, David Sera and Bradley Jenner starting from the 2nd row and Matthew Beninca also within 2 tenths of pole. 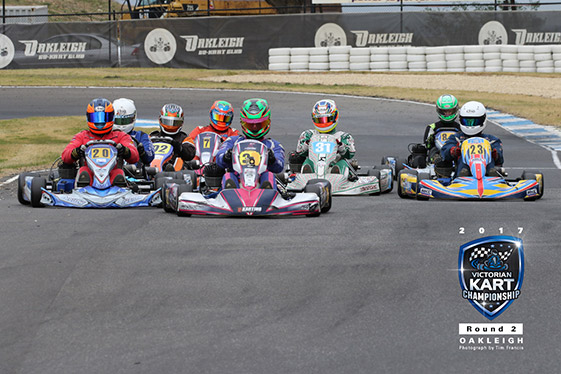 KA3 Senior Medium
Lukas Janev showed some great speed to take pole in the KA3 Senior Medium class a tenth of a second ahead of Remo Luciani, with Aaron Jackson and Kyle Frencham starting from the 2nd row.

It was a clean sweep of the heats for Luciani taking victory in all of them. 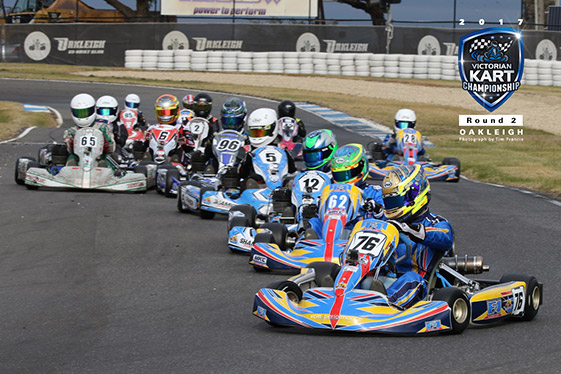 KA3 Junior
Christian Pancione continued his great form after winning Round 1 at Eastern Lions to claim pole position in the 18 kart field, just 2 hundredths of a second ahead of Joshua Smith, with Tate Frost and Coady Gorringe starting out of row 2.
In the early stages of the KA3 Junior heat 1 Gorringe had a roll over red flagging the heat. On the restart of the heat it was Pancione who took out heat 1, and Joshua Smith taking the win in heat 2 and 3. 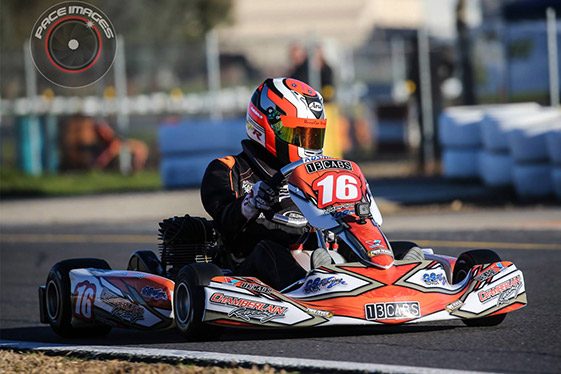 Everyone in the karting community is thinking of Coady Gorringe and the Gorringe family tonight after Coady’s accident today. We are all hoping you make a fast recovery Coady and are back racing again soon! 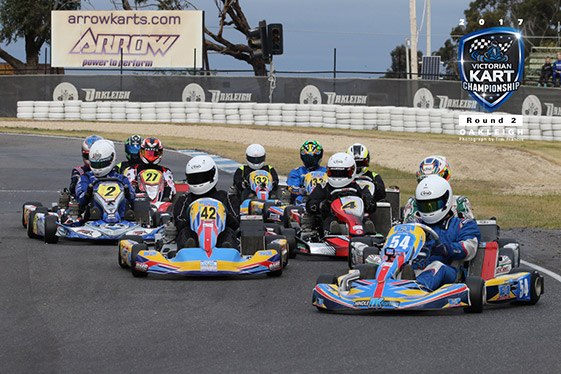 TaG 125 Heavy
Aaron Hindle took the pole with a lap of 39.729 1 tenth ahead of Hamish Ribarits with Justin Carless and Scott King rounds out the 2nd row.
Hindle going on to claim heat victory in heat 1, Ribarits victory in heat 2 and Carless taking heat 3. 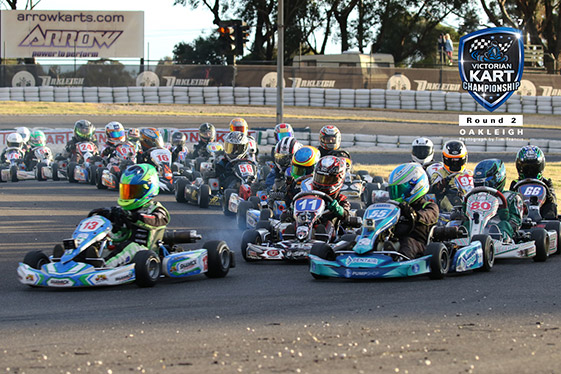 Cadet 12
A huge field of 25 drivers were running in the Cadet 12 class and it was James Wharton that was the quickest driver in qualifying just 1 tenth ahead of Fletcher Harris with a tiny margin separating the 2nd to 8th qualifyers including Will Harper, Damon Wood, Marcus Flack, Nicholas Sacco, Hugh Barter and Hugo Simpson.

James Wharton went on to win heats 1 and 3 while Fletcher Harris took out victory in heat 2. 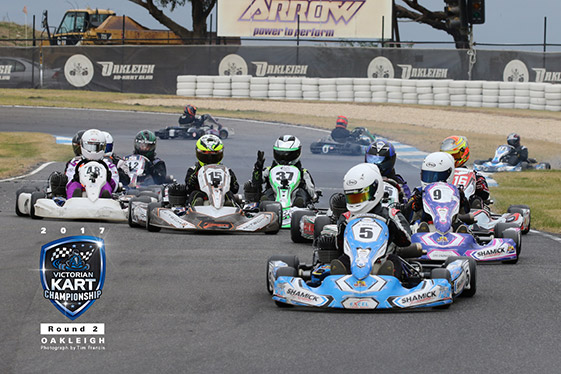 KA4 Junior Heavy
Jordyn Sinni made a statement putting in a great qualifying lap and taking pole by 2 and a half tenths of a second ahead of Thomas Smith with Round 1 winner Nathan Williams 3rd and Jackson Rice rounding out row 2.

Jordyn Sinni continued his strong speed in the heat taking out heat 1, but mechanical drama stuck in heat 2 forcing him into a DNF while leading, with Nathan Williams going on to claim the victory in the heat, while Sinni fought back to take the win in heat 3. 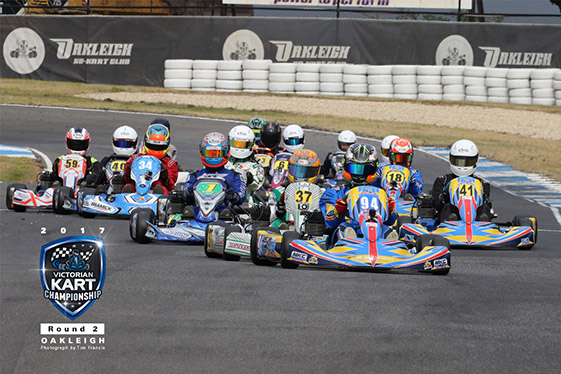 James Sera continued on his form from qualifying winning heats 1 and 2 with heat 3 to be run Sunday morning. 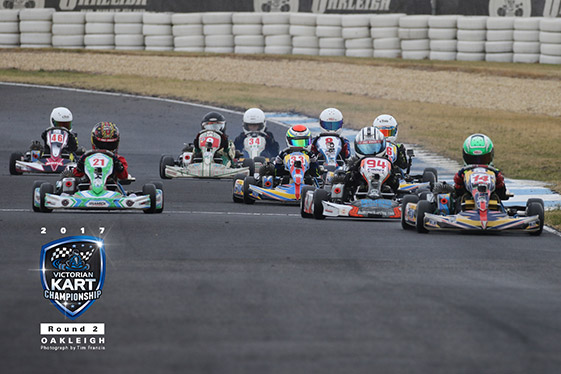 Cadet 9
Only 1 tenth of a second separated driver Toby Dvorak from Cadel Ambrose in qualifying with Dvorak taking pole with a lap time of 45.100. Round 1 winner Rusty Pointing secured the 3rd starting spot with Lewis Francis also coming out of the 2nd row.

Dvorak taking the win in heat 1 and 2 with heat 3 to be run Sunday morning.

Spectators are welcome to come along to the Oakleigh Go-Kart Racing Club, Deals Rd Reserve, Deals Rd, Clayton to see Victoria’s very best racing drivers live in action and see who will become Victorian State Kart Champion in their classes for 2017!
Finish of heats 3 are first up tomorrow morning, followed by heat 4, the finals and then presentations.