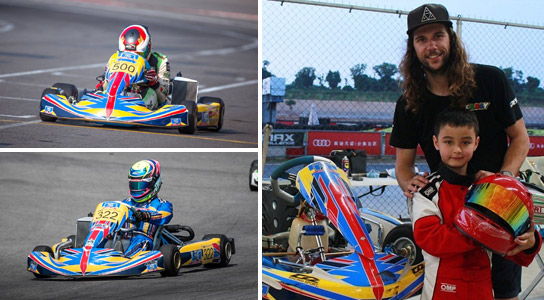 4 Victorian drivers headed over to Round 4 of the Taiwan Rotax Max Challenge last month which was held at the Liphao Racing Circuit on the 23rd & 24th of September, including David Sera (Geelong Kart Club) running in the DD2 class, Ray Hong Wang (Go-Kart Club of Victoria) in the Senior Max class, Ray Yu Wang (Oakleigh) in the DD2 class and Peter Bouzinelos (Go-Kart Club of Victoria) running in the Micro Max class.

The drivers produced some great results with David Sera winning the DD2 class,  Ray Yu Wang had a crash in the final in DD2 and slipped down the order after qualifying 2nd quickest, Ray Hong Wang 2nd in Senior Max, and Peter Bouzinelos was unlucky to hit a lapped kart while leading the final and was taken out.

See further details, links and photos below.
http://news.tvbs.com.tw/world/775214 (click the translate button at the top of your web browser to translate and read or else a full translation is listed below for those without this button).

International kart race on the 24th debut 8-year-old driver debut
The Rothsack Max Kart Race will be held at the Lippo International Circuit on September 24th, with more than one driver before the race, with the eight-year-old driver from Australia, Good results, the game is quite confident.
(Karting) and athletic karting, can be said to be the basis for all racing, Rohax Maxax (Rotax Max) Taiwan organizers held for many years, the competition The top three drivers will go to Portugal to challenge the international series championship trophy.

The Rachos Max Kart Race will be held on September 24th at the Lippo International Circuit, where more than one driver has been practicing, with the 12-year-old Micro group from Alonso (Australia) The small driver Peter (Peter) also participated in the practice.
Peter will be wearing a full red racing suit, quite eye-catching, Peter joined the ranks of the car about 1 year, this year’s arrangement in the Oufeng team, to Taiwan.

The first day of practice, Peter ran out of the lap 1 minute 01 seconds 45 results, is the five Micro group players in the best performance, responsible for training his coach Dave Sera (Dave Sera) has won the Australian championship , And even took the Rakakes Max Karts World Cup series second.
Coach Dave Serra interviewed that they are still adapting to the treadmill of the Taiwan region with the race weather, that the Lai Po International Circuit to provide the track terrain, very challenging, the game results are quite confident. (Central News Agency)

There was also this great Taiwanese article on David and Peter. (click the translate button at the top of your web browser to translate and read or else a full translation is listed below for those without this button).
http://www.carstuff.com.tw/more-racing-news/item/23756-2017-09-22-16-24-36.html

The Rotax Max tournament was held at 2017.9.24 in Taiwan, challenging the terraces of the Lippo International Circuit, and there was a lot of drivers in the Karting practice before the race.
We also captured the Micro group at the scene, an eight-year-old racing driver named Peter, from the Australian ALONSO Kart team, and he was proud to say that he was nine years old in November.
Peter’s loud nickname is called “The Red Machine”, he is wearing a full red racing suit, quite eye-catching, Peter joins the car for about a year, this year in the Oufeng team high boss arrangements, to Taiwan’s Li Bao International Racing (Lihpao Racing) to participate in Rotax Max game.
Practice the first day, he ran out of the lap 1’01 “45 results, today appeared a total of five Micro group players, the best performance, the original coach had taken the second of the Rotax Max World Cup!

Teacher out of high school
Accompanied by his coach in Taiwan called Dave Sera, has won the Australian championship, and even took the Rotax Max World Cup series second, they are still adapting to the Taiwan region with the race track, they think Lai Po The international racetrack this time to provide the track terrain, very challenging, but their own performance is also quite confident.

In fact, karting and athletic karting, can be said that all the starting point for all racing sports, Rotax Max Taiwan organizers held for many years, the qualifying top three karting drivers, on behalf of Taiwan to Portugal challenge championship trophy, Lippo international racing I believe that such activities can continue to promote Taiwan’s racing territory.