The 2nd round of the 2015 VIC State Kart Championship Series took place at the Go-Kart Club of Victoria, Todd Road, Port Melbourne at the weekend (17th to the 19th of April 2015).
The weather was a warm and sunny during the Heat rounds on the Saturday but with a change in weather early Sunday morning brought blustery conditions and intermittent showers all day Sunday. Challenging track conditions tested drivers and pit crews strategy and tire changing skills with the track quickly going from dry to wet and back to dry throughout the races on Sunday.


TAG 125 Heavy
15 drivers lined up for the TAG 125 class with the 54 kart of Aaron Hindle, 4 kart of Scott King and 92 kart of Ryan Aitken leading the way across the weekend. The conditions were quick blustery and the track was almost back to full dry, with Hindle and King clearing out from the rest of the field to go on and claim 1st and 2nd and Aitken claiming third, the 16 kart of Aron Lawrence finished 4th while the rest of the field were close and fighting each other for the remaining positions. 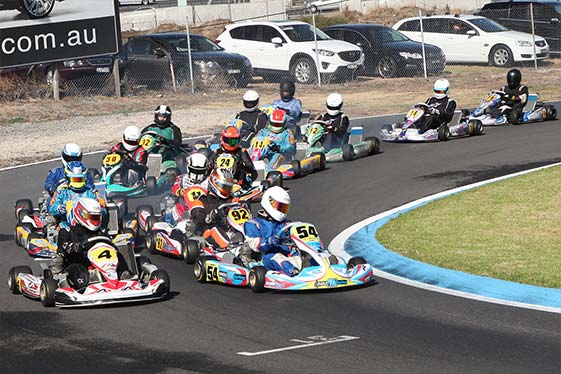 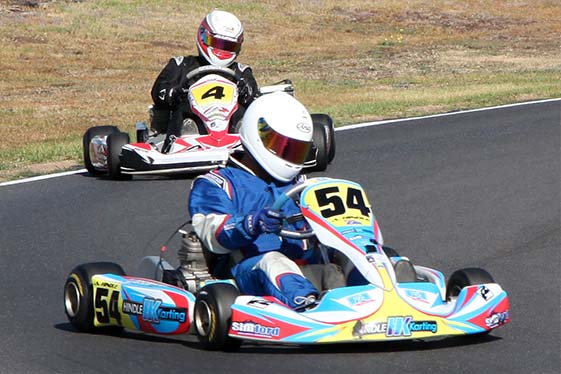 
Clubman Light
12 drivers were competing in the Clubman Light class with the 94 kart of James Sera, 33 kart of Justin Francis, 34 kart of Jordan Nicolaou, 15 of Braydon North, 19 of Spencer Ackermann and 12 of Matthew McLean up front fighting at the front of the pack across the weekend.

The final would see Ackermann start from pole with Nicolaou starting 2nd and Justin Francis starting 3rd. Early on Ackermann and Nicolaou were constantly swapping position that allowed Sera to quickly join them, Ackermann and Nicolaou were fighting for position at the hairpin before the back straight which made Nicolaou run wide and lose a lot of positions. Sera took the lead and was never headed winning by 10 kart lengths from Francis and North, with Nicolaou fighting back to claim 4th from Matthew McLean 5th and the 97 kart of James Cornfoot 6th. 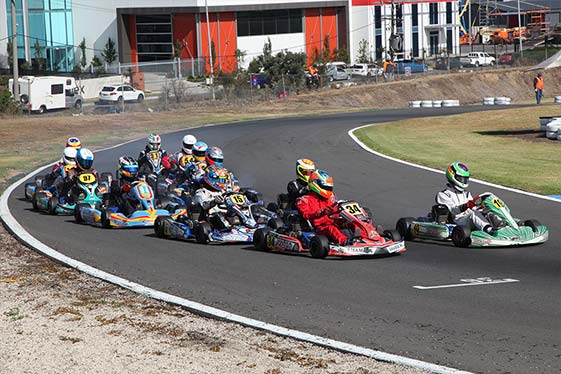 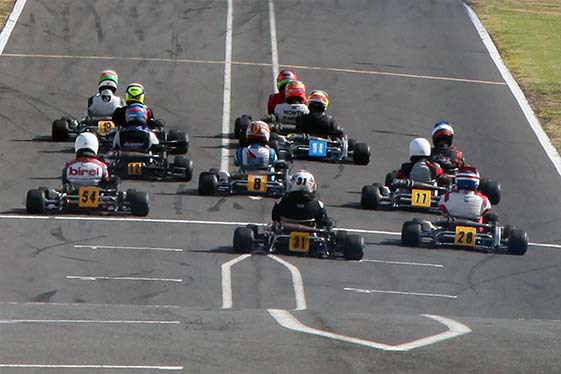 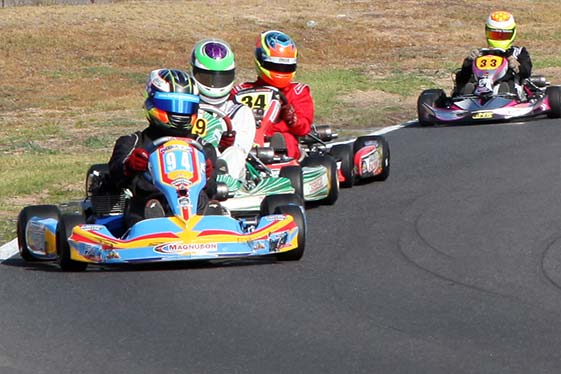 
Clubman Heavy
There was 8 starters for the class of Clubman Heavy, with the 14 kart of Leigh Nicolaou leading the way across the weekend. The final seen Nicolaou start out of position one, next to him the 15 kart of Matthew Wall and the 20 kart of Remo Luciani starting 3rd. On the roll arounds Wall experienced a mechanical issue and was forced to pull out before the start. Once underway it was Nicolaou and Luciani who cleared out from the rest of the field with a group of 5 drivers fighting over 3rd spot including the 3 kart of Ashley Seward, the 7 of Christopher Thomas, the 4 of Phil Smith, the 41 of Justin Bonacci and the 25 of Dylan Slits.

Half way through the final Nicolaou had built a comfortable 1 second gap to Luciani but in the last half of the race Luciani closed to the rear bumper of Nicolaou and played a waiting game and on the second last lap passed Nicolaou into the hairpin turn before the back straight but going into turn 1 on the final lap Nicolaou pulled out of the draft and passed Luciani only to have Luciani get the better drive out of the first turn to reclaim the position, going up the hill Nicolaou pulled a daring move to get by Luciani and went on to take the win, with both drivers demonstrating clean racing and putting on a great show for the spectators watching. 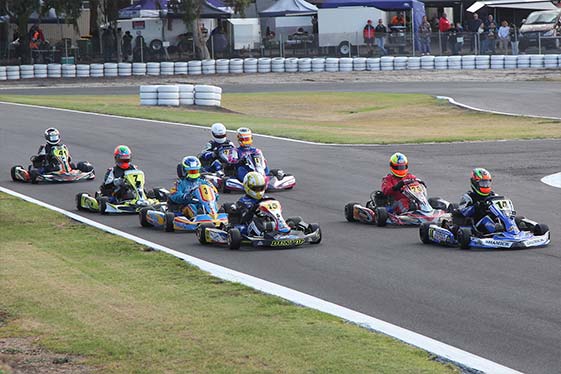 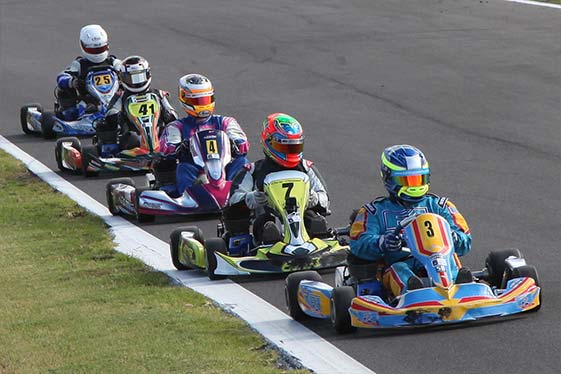 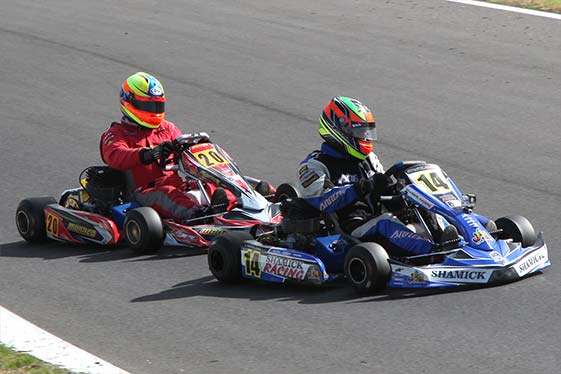 
Cadet 9
A field of 10 cadet 9 drivers were competing in the class across the weekend, with the 92 kart of Matthew Domaschenz, 66 kart of Will Harper, 78 kart of Anton Hortis and 56 kart of Damon Woods leading the front of the charge. In the final on a dry track Domaschenz and Harper duked it out for the lead early on but about half way through the race rain started to fall and with the drivers still on slick tyres the conditions became slippery and the lap times started to drop down by 5 seconds.

Domaschenz was the victor from Harper second and Hortis finishing 3rd. With only a few minor spins all the young drivers in the field showed great skill and drove well in the tough and tricky conditions. 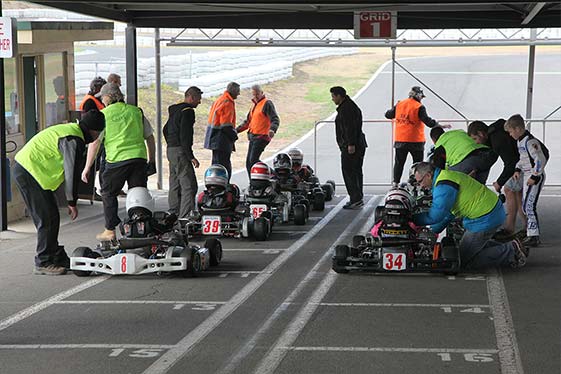 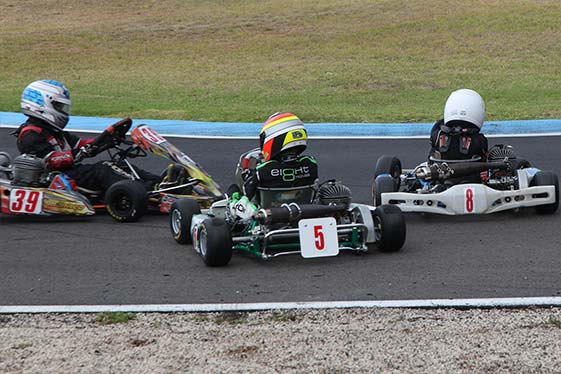 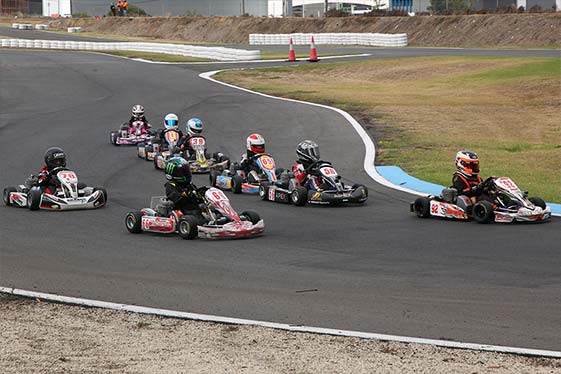 Cadet 9 class winner Matthew Domaschenz #92 and Will Harper #66 lead the field away at the start. Photos by tfdesign.com.au


Junior National Heavy
A grid of 15 drivers lined up for the Junior National Heavy class with the 60 kart of Cody Donald leading the field across the weekend and started the final from pole, next to him the 13 kart of Troy Alger and the 27 kart of Simon Fallon. With heavy rain falling on the track only minutes before the start there was a mad rush for pit crews on the out grid with mechanics franticly changing tyres and kart setup to wet before the race had even begun. In the open laps on a full wet track Donald had a slight spin at the left-right turn coming out of the first corner and ended up at the back of the pack. Alger the 5 kart of John Doria, Fallon and the 59 machine of Cameron Mclean were all up front fighting it out for the lead.

The 15 kart of Michael Clemente had a storming drive in the wet starting the final from 11th he passed karts on every lap and eventually got the bumper of Doria passing him and started to build a lead, but put a wheel on the wet paint under brakes at the outside of turn 1 and slid off the track for a DNF. With Doria holding on to win from a fast finishing 48 kart of Nicholas Carroll and the 66 kart of Benjamin D’alia driving well in the wet making up 6 spots to finish 3rd. 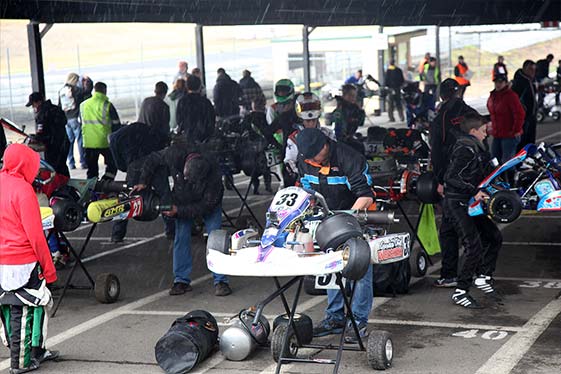 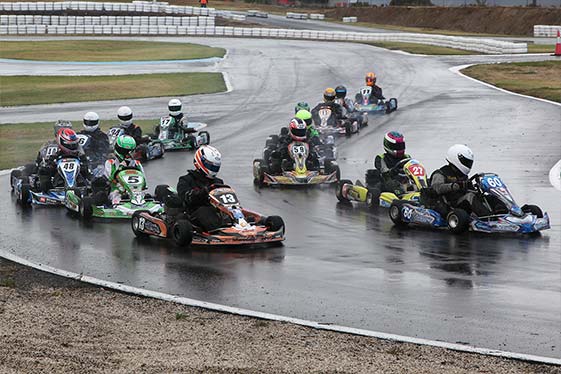 
Junior National Light
A big field of 27 drivers were competing in the Junior National Light class with the 85 kart of Angelo Mourouris leading the away across the weekend and starting the final from pole, next to him the 40 kart of Cory Arnett and starting 3rd the 4 kart of Joshua Smith. At the start Arnett grabbed the lead from Mourouris with Smith, the 55 kart of Jordyn Sinni and a big pack of karts fighting over 3rd position, but only a few laps in there was a big crash at the fast left hand turn coming off the back straight which involved the 13 kart of Alexander Grutteria and the 51 kart of Nicholas Matthews going into the tyre barrier. With the race being red flagged and having both drivers be checked over my medical staff to make sure they were ok.

On the restart their was a mechanical issue with the 94 kart of Finn Cassidy and the field was again brought into the pits while the next classes went on.

About 30mins after the initial start of Junior National Light rain had completely drenched the track and forcing all competitors onto a wet weather tyres and setup, and on the start into turn one Corey Arnett went up the inside of Angelo Mourouris but had a slight spin and rejoined in the midfield only again to be shuffled to the very back of the pack at the next right hander, with Mourouris also having trouble in the early laps finishing with a DNF, this meant a group of 3 karts got out to an early lead and eventually went onto hold positions with the 4 kart of Joshua Smith taking the win from the 97 kart of Benjamin Bargwanna and 3rd to the 15 of Michael Clemente all driving well in the wet and Corey Arnett with a storming drive making passes on every lap to fight back from his early trouble going from 24th to finish 4th. 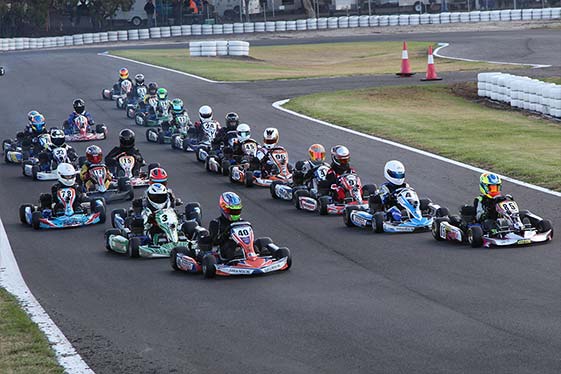 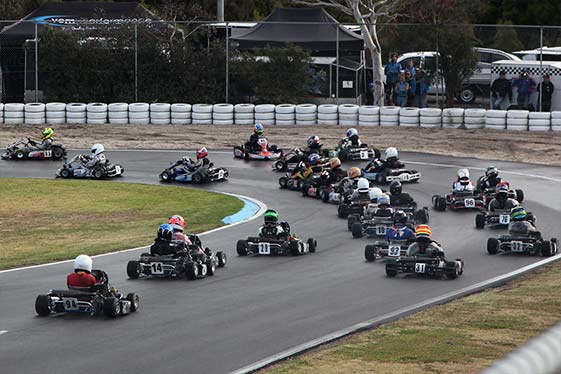 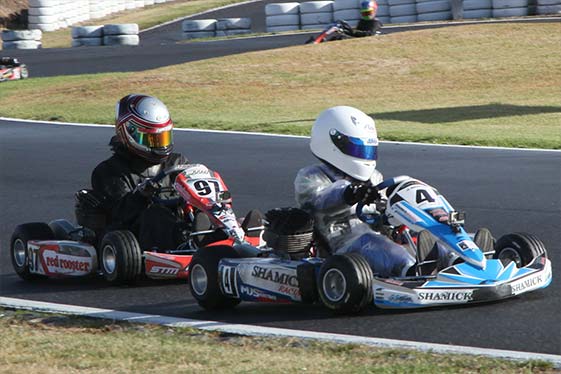 
Cadet 12
25 drivers lined up for the Cadet 12 class, with the 34 kart of Cooper Webster, 76 kart of Emerson Harvey, 64 kart of Kacey Mann and 88 kart of Jasper Ellery at the front of the races across the weekend. A wet final with a dry line starting to form would see Harvey start from Pole, Webster 2nd and Mann start from 3rd. In the opening laps Harvey dropped back to 8th, Webster took the lead and the 9 kart of Jay Hanson, 68 of Hugh Barter, 26 of Kai Allen and Ellery all fighting it out for second and third, with Webster taking out the win from Hanson 2nd and Barter taking 3rd. 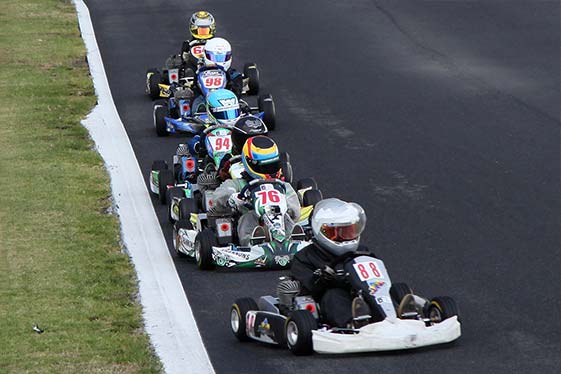 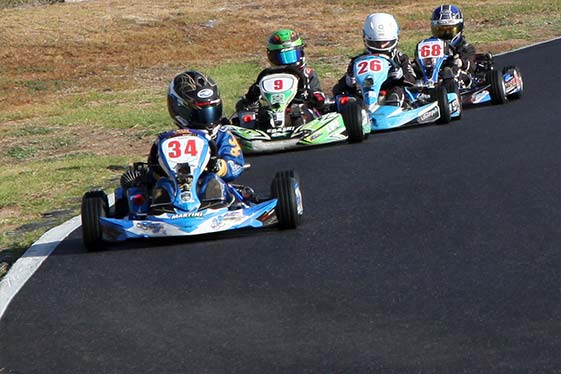 
Junior Clubman
The last final of the day was Junior Clubman. Earlier in the weekend the 16 kart of Cooper Murray qualified on pole and had taken out the win in Heat 1, Heat 2 and the PreFinal, followed closely by the 71 kart of Dylan Hollis who had also taken out 2nd throughout the weekend and the 95 kart of Aaron Cameron likewise claiming the 3rd spot for most of the weekend.

In the final again a small shower greeted the drivers as the field of 15 karts headed onto the wet track on full wets and again it was the 16 of Cooper Murray who controlled the start of the race building a 10 kart length gap to the 71 of Dylan Hollis who was 10 kart lengths ahead of the 81 of Oscar Piastri. The 29 kart of Matthew Iredale had a great start coming from the 2nd last row to 4th battling the 60 kart of Cody Donald and 95 kart of Aaron Cameron.

Around the half way point Piastri ran a touch wide at the entry to the hairpin before the back straight loosing a couple of spots, but up front Hollis closed the gap to Murray in the later stages of the race and was on the rear bumper of Murray going into the final lap, but it was Murray who held his cool and took out a clean sweep of the weekend a few kart lengths ahead of the closing Hollis with the 95 of Aaron Cameron claiming 3rd. 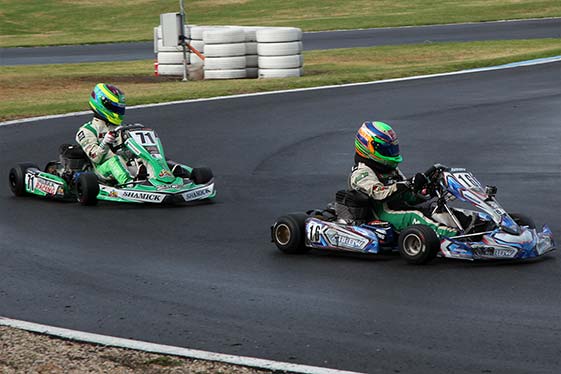 TAG 125 Light
The biggest field of drivers from the weekend was the Tag 125 Light class with 30 drivers competing. With the 24 kart of Bradley Marsh-Stepney putting in a great drive to claim 1st in the final, the 94 kart of William Hakes and 41 kart of Michael Carless who fought his way up to 3rd.

Restricted 125 Heavy
12 drivers were racing in the Restricted 125 heavy class, the 33 kart of John Pringle fighting at the front of the pack to take the final win from the 99 kart of Peter Gigis and 76 kart of Joshua O’Connor 3rd.

X30 Light
10 competitors were competing in the X30 Light class, with the 43 kart of Kyle Rethus coming from 4th in the heats through to take out the final, like wise the 94 kart of James Sera coming from 5th int heats to finish the final and 2nd and the 36 kart of Daniel Rochford who was the winners of the heats and prefinal finishing the final in 3rd with front runner Leigh Nicolaou recording a DNF.

Visit the Karting Australia CMS results page for full results from the weekend and check this page http://www.karting.net.au/nsw-kart-championship-standings for Victorian Championship points standings (URL says NSW but it takes you to VIC).