Round 1 of the 2017 Golden Power Series was held at the beautiful Bendigo Kart Club Marong Raceway located at Gold Associate’s rd, West of Bendigo on the 18th and 19th of February. Over 160 competitors were entered for the first round of the series with warm and sunny conditions greeting the drivers on Saturday with slightly cooler and overcast conditions for racing on the Sunday.

Photos, video and a round up from each class competing from the racing across the weekend is available to be viewed below. As always check the Karting Australia CMS system for the full results.

Checkout Coopers Photography, Pace Images along with TFDesign who were also producing great images from the weekends racing. 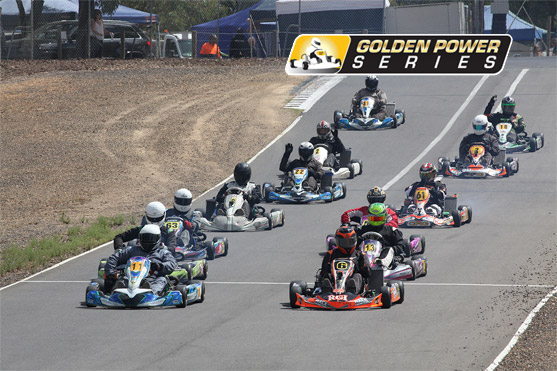 The first class on the schedule was TaG 125 Restricted Heavy, with a great field of 17 drivers lined up to take the lights from Bendigo member and karting stalwart Harry Arnett. It was a great battle all weekend between a mix of drivers at the front of the field including #6 Brett Jenkin, #2 Cameron Austen, #11 Martin Golledge, #5 Simon Pace, #13 Joe Brancati and #63 Brent Opie. In the final Jenkin would start out of pole with Gollegde out of position 2. Into turn 1 Golledge seen a small gap and just put his nose cone inside of Jenkins rear bumper as he was coming back to hit the apex with maybe a slight brush of contact resulting in Gollegde loosing his momentum and being shuffled back in the pack.

Current Australasian red plate title holder Austen put on a great drive coming from 4th position and fighting his way through to the lead to take out the victory with Brancati right on his tail and Jenkin less than a second back in 3rd. 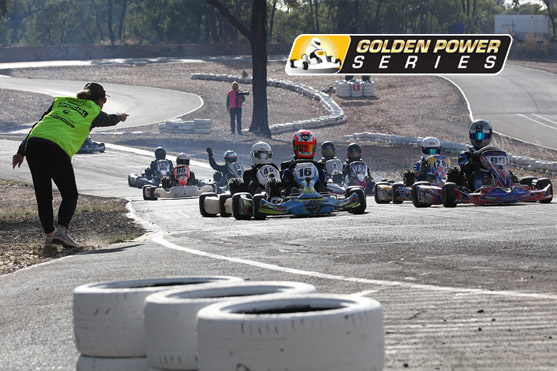 In the KA3 Junior class #96 Samuel Downing, #16 Coady Gorringe and #28 Matthew Hillyer were all within a tenth of a second of each other with #2 Declan Somers, #48 Nathan Skelton and #72 Zach Van Zanten also not to far away.

In the final Gorringe got the cleaner take off passing Downing entering turn one with Skelton also trying to go around the outside allowing Hillyer to sneak up the inside into 3rd.

Once the race settled down Downing started to slowly reel Gorringe back in eventually passing him mid race and going on to take the victory with Gorringe 2nd and Hillyer right on his bumper in 3rd.

Video of the start and finish of KA3 Junior class final 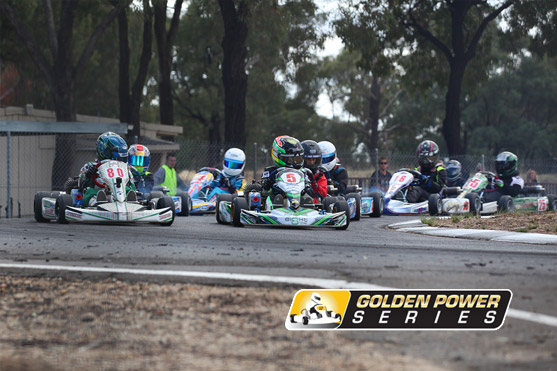 Cadet 12’s and 9’s
There was a great field of 16 drivers in the Cadet 12 class along with 1 Cadet 9 driver Lewis Armstrong.

#80 Nicholas Sacco, #5 Brodie Thomson, #46 Ayrton Filippi, #8 Luke Van Zanten and #43 Owen Kemp were up the front for most of the weekend with #18 Simon Whiteford, #4 Rustyn Willett, #7 Jack Lawson, #16 Charlee Richardson, #25 Jordi Belton and #57 Akasha Mceachran racing each other in the mid pack.

In the final it was the 4 karts of Sacco, Thomson, Kemp and Filippi out front early but Sacco and Thomson got away and had a great close scrap all the way to the end of the race Sacco crossing the line with Thomson right behind him in 2nd, Filippi 3rd and Van Zanten in 4th.

Video of the start and finish of Cadet 12 class final 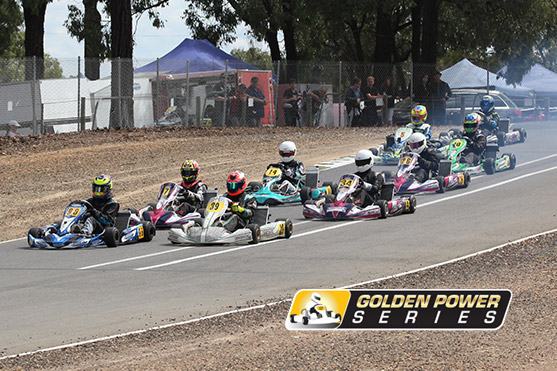 It was a good duel at the front of the TaG 125 Light class all weekend between #39 Mark Rechichi, Bendigo member Corey Arnett and #98 Curt Sera. Arnett started the final in 4th position but made a blistering start making up 2 positions at the first turn and getting by Rechichi to take the lead at the turn 3 canteen corner where moments later the corner would see a multi kart pile up including #14 Clayton Richards, #7 Codey West and #5 Elly Morrow.

Arnett going on to take the victory with Rechichi 2nd a kart length back and Curt Sera in 3rd also within a second of the lead. 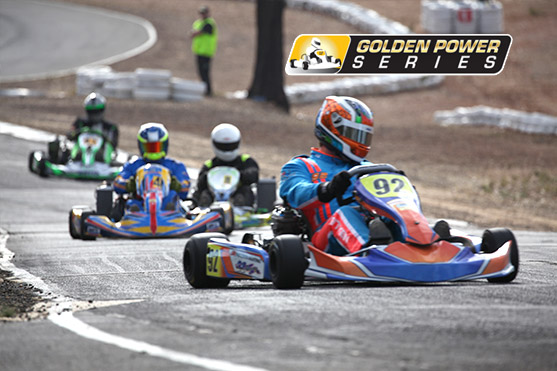 #92 Ryan Aitken had shown the rest of the drivers a clean set of heels over the weekend but didn’t have it all his own way in the final slipping back to 2nd after #4 Ashley Seward made a great start and slipped up Aitkens inside at the first turn. As the race wore after a great scrap involving Aitken, Morrow and Seward, Aitken was able to regain the lead and went on to take the victory 1 second ahead of #8 Samuel Morrow with Seward close behind him in 3rd. 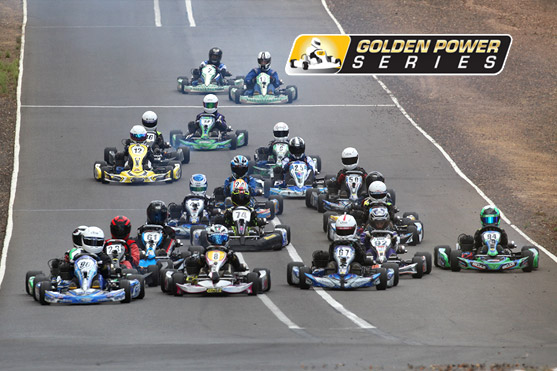 Bailey Collins was at the front of the class all we
ekend along with Bradley James. Collins starting out of pole and built a 1 second gap on James, however on the last lap Collins was coming up to put a lap on another another driver and caught him at the fast kink coming out of the first turn and into the turn 2 “thunderdome” left hander resulting in Collins running wide and into the dirt allowing James, Jack Pennacchia and Kobi Williams all to get by, with Collins finishing with an unlucky 4th position. 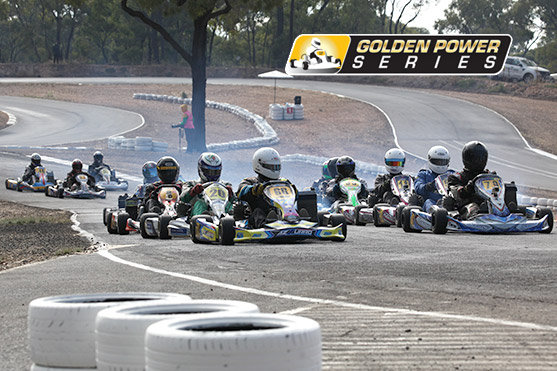 11 drivers were competing in the TaG 125 Masters class with #79 Brendan Myors, #2 Ian Branson, #3 Geoff Wyhoon, #20 Mark Poole, #18 Vern Kranz and #6 Shaun Francis all at the head of the pack throughout the various stages of the weekend.

At the start of the final Branson lead the field away with Myors applying enormous pressure trying to work his way by in the opening stages but as the race went on Branson was able to pull a gap going on to win by a second from Myors, with Poole doing well to hold of Wyhoon and Francis who were all nose to tail. 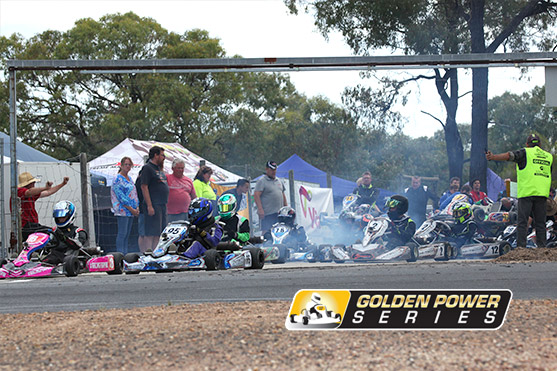 A good field of 15 KA4 Junior Heavy drivers lined up to take the lights from starter Harold Arnett and it was the kart of #18 Matthew Morris along with #95 Daniel Hookway who were fighting it out for the lead across the weekend with #20 Kade Gibson and #2 Declan Somers right on there tail.

In the final Morris got a great clean start and was able to pull a gap immediately however the reform flag was displayed and the field would have another go at a clean start. At the restart Morris again looked to have gotten the better run on the main straight but this time Hookway kept with Morris on the inside and held onto the lead coming out of turn 1. Coming out of “thunderdome” turn 2 Morris looked to have run wide with Gibson slipping by but then amazingly Morris was still able to out brake Gibson into the turn 3 canteen corner after only just coming back from being on the dirt. This allowed Hookway to get a small gap early on but was soon reeled in and eventually passed by both Morris and Gibson.

Morris and Gibson both then shared a great scrap for the lead and coming onto the main straight to start the last lap Gibson got a good run and with a nose in front and he wasn’t going to be left wondering what could have been tried to stick with Morris on the outside at turn 1 but couldn’t quite hold it and slipped offline onto the dirt, rejoining at the back of the pack.

Morris going on to hold onto the lead for the rest of the lap taking victory ahead of Hookway 2nd and Somers 3rd. 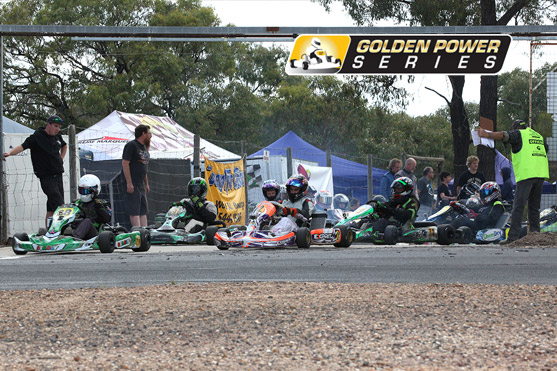 A big field of 19 TaG 125 Restricted Medium drivers were competing at the series opener with #2 Billy Westerveld and #28 Beau Humphrey fighting it for the lead across the weekend and in the final these two would lead the pack away. #99 Simon Pace snuck up the inside of #5 Blair Van Ree into turn one with Van Ree getting loose and running wide through the dirt and loosing a lot of ground. Westerveld and Humphrey were able to build a gap to trailing pack and went on to take 1st and 2nd, #9 Jackson Griffith 3rd. 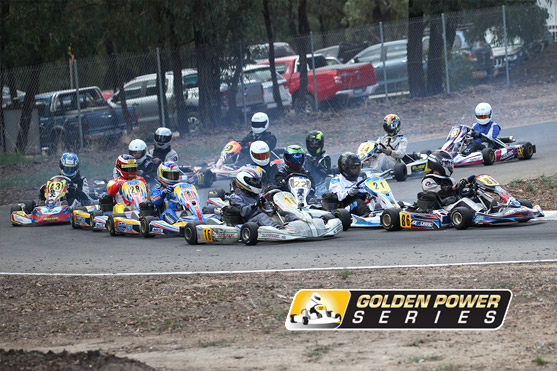 The KA3 Senior light class had a whole different look to it this year having an injection of youth with a number of fast junior drivers making their debuts in the senior ranks including #86 Nicholas Trebilcok, #16 David Huezo and #43 Taine Venables.

You could see why Nicholas Trebilcock was named Karting Victoria Junior Karter of the year for 2016 with Trebilcock out front for most of the weekend.

In the final however the inside line of Trebilcock and Venables did not get the best launch and it was Huezo that took over the lead and #8 Angelo D’Ettorre slotted into 2nd with Trebilcock 3rd, Venables dropping way back into 7th after turn 1. Trebilcock slipped by D’Ettorre at the last corner and went about chasing down Huezo, eventually getting to Huezo and passing him in the later stages and going on to take 1st from Huezo.

After putting in a great drive to claw his way back from 7th it was Taine Venables taking 3rd position meaning it was a sweep of the podium for the juniors coming into the senior ranks in this class.

The kart of #92 Ryan Aitken had lead most of the weekend in the KA3 Senior Medium class but in the final it was #95 John Reynolds who was up the inside into turn one with Aitken on his outside with Aitken running offline and out onto the dirt dropping to the back of the pack.

Aitken was 2 seconds behind after rejoining on the opening lap but was able to show the speed he had over the whole weekend to get his way back to 2nd, with Reynolds holding on to take the win and #42 Heath Jelbart in 3rd. 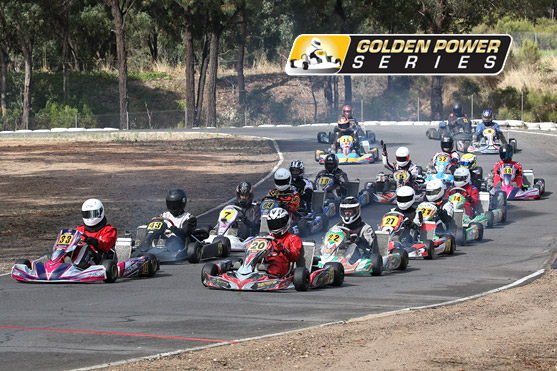 The final class on the schedule was the huge field of 20 drivers for TaG 125 Restricted Light. #7 Gerry Westerveld and local member and Bendigo club president Matthew Ferrari were doing most of the front running throughout the weekend, with #5 James Fyfe, #33 Ryan Phillips, #27 Simon Phillips and #43 Bradley Shepherd also at the pointy end of the feild.

At the start of the final Ferrari lead the field out of turn 1 through the kink but out of the thunderdome turn 2 he had #7 Westerveld trying to get by. Into the 2nd double right hander #33 Ryan Phillips got a bit of airtime riding briefly on the back of Westerveld and dropping a few spots back.

A few laps in there was a small crash coming out of turn 1 involving, #14P Daniel Huezo Caceres and #22 Thomas Beattie as a result of a slow moving #84 Joshua Phillips who was just rejoining the racing line after being passed by #33 Ryan Phillips resulting in Beattie and Caceres both with a DNF.

Westerveld went on to win by a second from Ferrari, but in the post race scrutineering it was found that Westerveld had a technical infringement resulting in a DSQ from the final, meaning Ferrari was promoted to 1st place, Shepherd 2nd and Simon Phillips in 3rd place.

Well done to the Bendigo Kart Club and all of the people involved who put on a great race meeting. The series now moves onto Round 2 at Rochester Kart Club in only 3 weekends time and we hope to see everyone there for another great meeting.

A big thankyou to the series sponosor Kerbrider make sure you stop by the Kerbrider store for all your karting needs. Coopers Photography were there on both days with Pace Images also in attendance on Sunday, make sure you check them out for some great photos from the weekend.

Pace Images and Coopers Photography were also present over the weekend, make sure you check them all for all of the great photos across the weekend.